In the cannabis space this week, two key players in the industry agreed to adjust a major deal that they first announced to investors last year.

Meanwhile, expert speakers at an online marijuana event discussed ongoing issues in the market, including where investors are directing attention and the slow path to federal legalization in the US.

Read on for a closer look at some of the biggest cannabis news over the last five days.

Find out what experts say about profiting from the cannabis market in 2020!


Give me my free report!

News hit on Thursday (April 25) that Canopy Growth (TSX:WEED,NYSE:CGC) and Acreage Holdings (CSE:ACRG.U,OTCQX:ACRGF) have amended the terms of a unique deal that gives Canopy the option to acquire Acreage when cannabis becomes federally legal in the US.

The deal between the companies was first announced last April and was valued at a whopping US$3.4 billion. At the time, the arrangement was touted as a win for both parties — Canopy would eventually gain access to the US market, while Acreage would be able to draw on Canopy’s “deep pockets.”

This week’s announcement decreases the value of the transaction to US$843 million, according to BNN Bloomberg, a far cry from the original multibillion-dollar amount. According to the companies, the change was made partially due to current market conditions:

Considering the challenging economic environment and increasingly tighter and volatile financial market conditions, particularly for cannabis companies, Acreage determined that the New Arrangement represents the best available prospect that is compliant with the terms of the Arrangement Agreement to maximize potential value for Acreage shareholders.

Under the adjusted agreement, Canopy will make an upfront US$37.5 million payment to Acreage shareholders, which works out to about US$0.30 per existing share.

The arrangement will also see Acreage’s shares get split into fixed and floating classes — 70 percent of each existing Acreage share will be converted into a fixed share, with the remaining 30 percent converted into a floating share. Completion of the deal is still contingent on US federal legalization, and once it occurs Canopy will trade 0.3048 of a Canopy share for each Acreage fixed share; Canopy will also have the option to buy each floating Acreage share for a minimum of US$6.41.

Finally, Canopy will loan Acreage up to US$100 million to advance its hemp business.

Market watchers have had mixed reactions to the changes. Marijuana Business Daily quotes Cowen’s Vivien Azer as saying that it “significantly reduces potential dilution from the deal and provides some optionality.” The news outlet reported a less favorable reaction from Owen Bennett of Jefferies.

Read our new report on the MJBizConINT'L Conference


Give me my free report!

“Assuming Acreage can remain a going concern until such time as we reach federal legalization … Canopy faces guaranteed dilution from a business that, given its current problems and huge cost base, is only likely to add to the pressures currently being faced,” he said in a note. Acreage took a share price hit earlier this month when it announced a short-term $15 million loan with an interest rate of 60 percent.

For its part, Canopy has been in the news lately due to its turnaround strategy, which was announced in April. It also released its most recent quarterly results about a month ago, disappointing investors.

Many events in the cannabis space have gone online recently due to COVID-19 restrictions, and the latest was this week’s Prohibition Partners LIVE conference. The two day gathering touched on a number of key issues in the space, including changes in what investors want to see from companies.

On the whole, there was agreement that investors have matured and now prefer a simplified approach with a focus on cash flow — in fact, Alan Brochstein of 420 Investor and New Cannabis Ventures went as far as to say that investors will penalize companies whose business models are too complex. 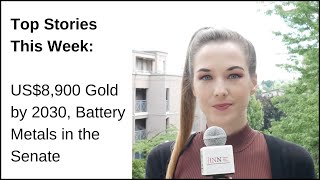 Aside from that, speakers at the web-based event discussed what’s happening with federal legalization in the US, a process that has ended up being much more slow and complicated than many market watchers had hoped. Brochstein suggested that for reforms to happen, the Democrats will probably need to control both the House and the Senate.

For his part, Narbe Alexandrian, CEO of cannabis investment firm Canopy Rivers (TSX:RIV,OTC Pink:CNPOF), believes that it will take two to five years for federal legalization to come to the country.

Don’t forget to follow us @INN_Cannabis for real-time updates!

Securities Disclosure: I, Charlotte McLeod, hold no direct investment interest in any company mentioned in this article.

Find out what experts say about profiting from the cannabis market in 2020!


Give me my free report!
Investing News Network

Aurora Cannabis Announces Retirement of Terry Booth from Board of Directors