Of all the Canadian cannabis companies that have arisen over the past few years, one of the most promising is Meta Growth (TSXV:META) (OTCMKTS:NACNF). This little-known cannabis retailer has already had some impressive growth, which means investors should be taking a closer look at its operations.

With an experienced and proven management team at its helm, the company has generated an astounding $60 million in sales since Canadian cannabis legalization back in 2018.

On top of that, the company has managed to show tremendous growth in the most recent quarter. META’s reached $16.8 million in retail revenue for that quarter, which represents an increase of 407% from the first quarter of the year. Already, Meta Growth has a total of 35 licensed retail stores in Alberta, Saskatchewan, and Manitoba.

By the end of 2020, the company projects that it will have as many as 90 stores in total. Considering that it was one of the first movers into the cannabis retail space, it’s impressive Meta Growth (TSXV:META) (OTCMKTS:NACNF) has managed to become one of the leaders.

Investors should note that Meta Growth is considerably well positioned, and will likely prove profitable for shareholders. While its dominance of the retail space is a major strength, it has also managed to raise more revenue per square foot than many of the world’s biggest retailers. Currently, the company boasts annual revenues of $1030 per square foot, which places the company in the upper echelons of the retail space.

In the near term, Meta Growth (TSXV:META) (OTCMKTS:NACNF) has two major drivers of growth. The first is that, after the new stores are opened, around 30 of them will be in Ontario, which is the most lucrative province in Canada for cannabis companies.

The second factor is the legalization of derivative, or ‘Pot 2.0’. Cannabis consumables are hitting retail shelves as of next week, and with that, the company projects growth will accelerate. Analysts also believe that this is the next frontier for the cannabis industry and expect Pot 2.0 to add as much as $2.7 billion in yearly sales to the sector. Meta Growth (TSXV:META) (OTCMKTS:NACNF) is in a strong position to take advantage of this second cannabis boom.

The company already sells as many as 40 pot brands and retails a wide variety of products, from dried flower to smoking accessories. META’s growth will be driven by products like edibles, concentrates, and cannabis-infused beverages. Many existing companies will not enjoy much growth, but seeing as Meta Growth (TSXV:META) (OTCMKTS:NACNF) enjoys a first-mover advantage in the retail space, it will likely ride the new wave of profitability.

For a full research report, please visit this link. 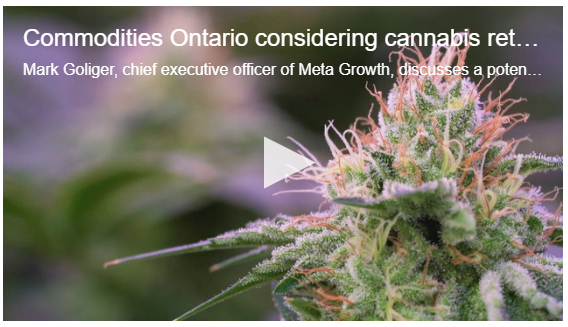 VANCOUVER, BC / ACCESSWIRE / April 4, 2020 /Mota Ventures Corp.(CSE:MOTA)(FRA: 1WZ1)(OTCPINK:PEMTF) (the “Company” or “Mota”) is pleased to provide an update on the recent progress that is fueling the increase in sales for products …

3 Pot Stocks to Watch Closely in 2020 Amidst Coronavirus Outbreak

The cannabis industry has been in trouble for around a year now, and many of the stocks have seen record declines during this period. Many pot stocks suffered from issues of oversupply, slow rollout of …

The stock markets in the United States are currently in a state of turmoil due to the escalating coronavirus crisis. The bull run that ran for around a decade eventually had a bearish phase last …

TGOD Stock Hits New Low: Any Way Back for the Troubled Pot Stock?

TGOD stock sunk to a new low of $0.41 this week amidst persisting headwinds in the Canadian cannabis space—is there any hope of redemption for the troubled Green Organic Dutchman (TSX:TGOD) (OTCQX:TGODF)?

The rise of legal cannabis and the shift from the black market to the legitimate industry has led to the creation of many new cannabis exchange-traded funds (ETFs). An ETF is an investment fund traded …

Just as 2020 was starting to shape up to be a fruitful year for pot stock investors, the cannabis market was dealt a major blow on news that Aurora Cannabis (TSX:ACB) (NYSE:ACB), the second-largest cannabis …