During the first day of legal cannabis in Canada, there have been a couple of interesting ‘happenings,’ shall we say. Some rules have been broken and some supplies have not been met in the high of legality celebrations. Sales have been massive, and the lines of people outside of dispensaries even more so.

Let’s take a look at the first day of legal cannabis in Canada—the ups and the downs.

In Winnipeg, only one hour after cannabis was legalized, the first case of drug driving was intercepted by police and the first official ticket given for smoking cannabis and driving.

As Inspector Gord Spado of the Winnipeg police put it, "an hour into legality, and something illegal" happens.

If day one is anything to go by, all the cannabis companies will need to deliver more green.

According to the Nova Scotia Liquor Corporation (NSLC), the province took in 12,180 transactions yesterday. The total was over $660,000 in cannabis sales.

The NSLC is the only licensed retailer allowed to sell cannabis in Nova Scotia. It currently has twelve outlets selling cannabis.

Toronto Police felt the need to launch a campaign of Twitter ads asking people not to call in about people smoking weed.

Apparently, the province has been inundated with calls over people “smoking joints.”

In response, it released a set of ads like the one below to remind people that marijuana is now legal and therefore not a criminal offense. 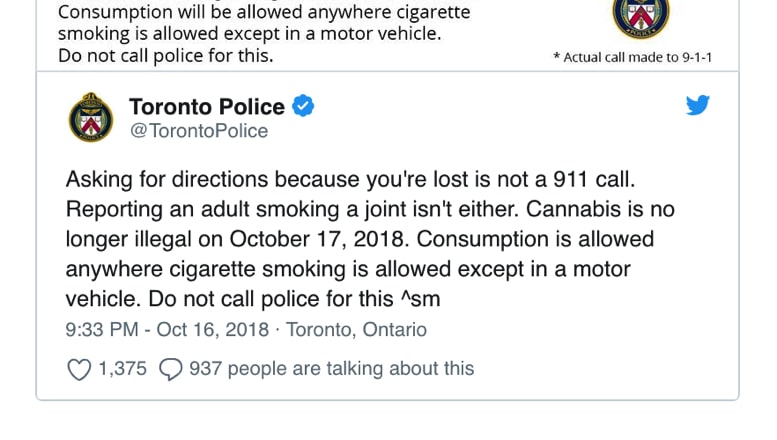 First Day of Legal Cannabis: Edmonton is Running Out Already

By the second day of cannabis legalization, Numo Cannabis is already down to only one-quarter of its supply. Mr. Seeras of the company said, “As of right now, we still have 10 strains out of 30.”

What will this mean for the next few weeks? Has Canada bitten off more than it can chew legalizing cannabis?

For a long time, CBD has been misunderstood among people and even governments across the world. Many people still don’t know the difference between CBD and other marijuana ingredients, such as THC (tetrahydrocannabinol). CBD is …

The Curious Case of Cannabis Edibles: Consumers vs. Physicians

Toward the end of 2019, Canada made the next move in its cannabis legalization journey. After much debate, the nation updated its cannabis regulations, allowing the legal production and sale of cannabis edibles. Cannabis companies …

How Celebrity Cannabis Investors Like Drake Can Save the Sector

When news first broke that Drake’s next collab wasn’t with Kanye or Rihanna—but instead with Canopy Growth Corporation (TSX:WEED) (NYSE:CGC)—cannabis investors all over the industry took notice.

Details of the Drake/Canopy Deal

Why Cannabis Dispensaries Need to Hire a Team of Interior Designers

Cannabis culture has evolved over the past few years. Dispensaries have gone from venues on the outskirts of town to stores that look like they could give the Apple Store a run for its money. …

The race to corner the CBD market is now heating up. Canadian pot maker Tilray Inc. (NASDAQ:TLRY) recently announced that it would acquire hemp food company Manitoba Harvest for $317 million in cash and stock. …

The Beginner’s Guide to Marijuana Investing

Move over, bitcoin, because the world has got a new investment pet: marijuana stocks! Similar to the cryptocurrency trend that took the world by storm, the cannabis industry has caused some controversy. But, there is …

Marijuana Legalization at the Federal Level; How Will this Affect Investing in 2019?

2019 will likely be the year in which we’ll finally see a US federal vote on legal marijuana, as America officially seats the most pro-cannabis reform Congress in its history. Last week, Democratic Senator Ron …

Cannabis Edibles: Which Companies are Leading the Charge?

Feb 6, 2019 Herman Cheng
Cannabis edibles poised to be top-seller in Canadian market, but look out for delays and shortages

With the cannabis edibles market in Canada set to take off after the official retail legalization date, currently set …

The once heavy-weight boxing champion of the world, Mike Tyson, is building a cannabis resort on 40-acres of desert land in California City.

Now that the state has officially legalized marijuana entirely, Tyson …