It's no secret that pot stocks have had a hard run over the last year or so, with some of the largest cannabis companies losing two-thirds or more of their value.

Many believed that 2020 would be see a massive pot market rebound, that is, until the coronavirus took the world by storm. The global economy essentially shutdown for months, major stock markets saw steep declines, and pot stocks were no exception.

Luckily, the world is already beginning to go back to normal, and as equity markets begin to rebound, so will the cannabis industry.

In fact, global legal spending on cannabis is forecast to reach $40.6 billion in 2024, which is nearly triple the $14.9 billion estimated in 2019, according to Arcview Market Research and BDS Analytics.

Investors on Robinhood are going crazy for a handful of pot stocks, all of which are trading at steep discounts compared to their prices back in 2019.

These former industry giants could be making a serious comeback once the market rebounds. At least, that's what thousands of Robinhood users seem to believe.

Let's take a look at what these popular Robinhood cannabis stocks have been up to and whether or not they are worth adding to your watchlist. 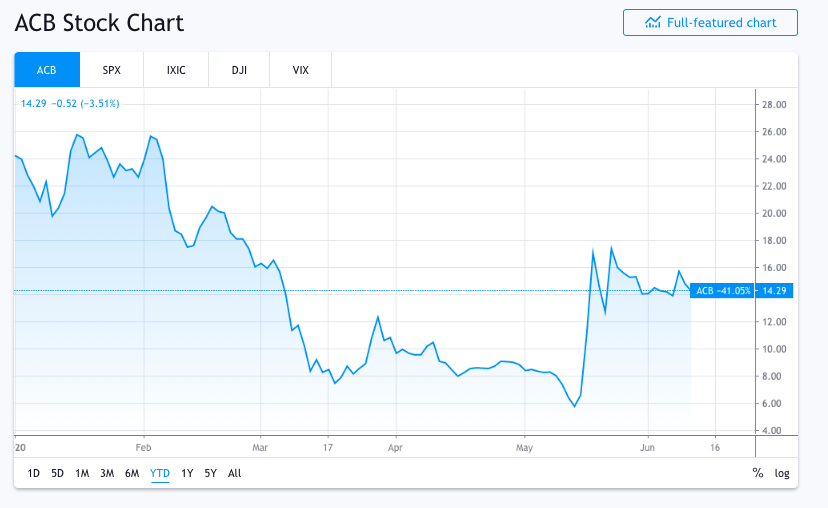 Anyone who has paid any attention to the pot market knows that Aurora Cannabis is one of the biggest names in the industry. Those people also likely recall when the former giant nearly bottomed out late last year.

Depressing earnings, the potential layoff of up to 500 staff, and the loss of its longtime CEO Terry Booth caused Aurora stock to tumble by 50% within a month to below $1, triggering a potential delisting from the NYSE.

After deciding to consolidate all of its outstanding common shares on a 1-for-12 basis to maintain its listing, ACB stock went from $0.69 to $7.90.

If you weren't burnt by the company during the whole ordeal, Aurora Cannabis might be a good pickup before the upcoming pot market rebound.

>> What Earnings Season Tells Us About 3 Top Pot Stocks

Although the mass layoff and the C-suite restructuring could be seen as a negative thing, it's clear that the company is looking to right its former wrongs.

Aurora just reported strong fiscal Q3 2020 earnings, which imply that these improvements are already materializing. The company sold 12,729 kilograms of cannabis, up 34% from the last quarter. ACB's net revenue of $78.4 million was up 18% quarter-over-quarter, while its consumer cannabis net revenue of $41.5 million was up 24%.

Investors seem to believe in ACB, with 464,750 Robinhood users who currently own company shares. Analysts also have high hopes for ACB, with 12 Wall Street analysts offering the company an average 12-month price target of $27.93.

Canopy Growth Corp. is another industry giant that took a severe hit in 2019 and saw a massive depreciation in value.

Like Aurora, Canopy Growth also dropped its CEO, company founder Bruce Linton, after reporting a net loss of C$670 million and an underwhelming net revenue of C$226.3 million for its 2019 fiscal year-end results.

Also like Aurora, the company has been taking the necessary steps to cut costs and improve its margin profile, which includes curbing supply expansion and focusing geographic investments.

In the release, Canopy also outlined its strategic plan, which includes resetting its strategic focus, rolling out a new organizational design, and implementing a comprehensive operational and supply chain productivity program.

Analysts have offered CGC stock an average 12-month price target of $36.12, which suggests a potential upside of 103%.

At present, 240,856 Robinhood users own shares of HEXO; however, if the company's stock continues to dip below the $1 level, it could spell serious trouble.

HEXO stock has only breached the $1 mark a handful of times since the beginning of April, which means that the company might follow in Aurora's footsteps and complete a reverse stock split to remain listed on the NYSE.

With that in mind, it might be a good idea to avoid HEXO stock for the time being.

The cannabis industry may have hit a speed bump in its road to recovery due to the global pandemic, but things are already starting to look up.

The pot market crash in 2019 no doubt left a sour taste in some investors' mouths, but the future could be very bright indeed. One thing's for sure, the downfall has turned some of the hottest pot stocks into affordable pickups.

Are there any cannabis stocks on your radar? Let us know in the comments!

The coronavirus pandemic has not been a particularly great time …

The coronavirus pandemic and the associated turmoil in the markets …

The cannabis industry was struggling considerably even before the coronavirus …

The marijuana industry has been in all sorts of difficulties …

Investors who are interested in the marijuana space have probably …

MedMen stock has sunk to a new low of just …

Zenabis stock is sinking on Thursday after the company announced …

Last week, prices continued to fall on the stock market, …

Aphria stock is trading down today despite being offered a …